The first show of 2015 at Open Space features five artists and two curators, Lynda Gammon and Wendy Welch. The catalogue begins with an observation…..

“We live in an image-world. Selfies on Facebook, instant sharing on Instagram, and photo albums on Flickr, all demonstrate our intense desire to re-present our world. Through the practice of painting, the artists in this exhibition, each in their own way, are re-presenting and interrogating the meaning of representation, and in turn, questioning our ways of perceiving reality.”

Jeremy Herndl focuses on landscape. His paintings give the sense of being created outdoors in an attempt to catch scenes glimpsed fleetingly. He is more concerned with the overall impression than with individual details and his work often borders on abstraction. 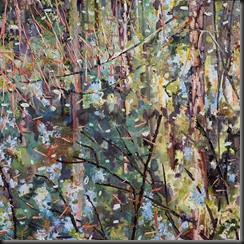 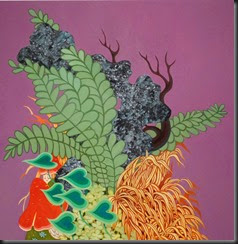 Neil McClelland’s paintings of bathers manifest a Cezanne- like interest in form and planes. 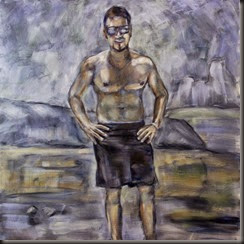 Some may remember Todd Lambeth’s paintings of cats at Deluge Gallery. This new series of paintings shows the backside of paintings. It makes for a somewhat coy statement. Not as powerful as the NYPD turning their backs on the mayor perhaps but it hints at some kind of negation or reluctance to specify the content.We have to imagine it. 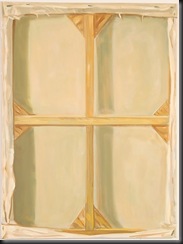 This being a group show one looks inevitably for associative elements. So what is the common thread here?

They are all painters. And they all deal with representation in the sense that they use recognizable subject matter, as distinct from abstraction which so often relies on titles for reference points. Beyond that there is an unrestricted plein air feeling to the whole show that suggests an empathy for landscape. There is a perceptive essay by Wendy Welch in the catalogue which explains the concept behind the show…

‘Realities Follies questions how the real can be represented in painting through form and process….Reality in a painting can move from objective images of the world to subjective constructs based on the physical experience of creating the work’.

Not to downplay Welch’s thesis but the same can be said of sculpture, photography and even conceptual art. All art forms in fact can and do go beyond representation. Still in this context she is making a case for painters having more physical control of the reality they choose to represent as opposed to the reality of photography. She admits a consensus on what reality is might be hard to come by but she sees painters ‘letting imagination, memory and the painting process itself direct the end result’.

She describes Herndl’s paintings for instance as a kind of shorthand, a meditation on light, forms and colour whereas Leong creates a fantastical reality rom hybrid sources, Lambeth questions the nature of painting, McClelland takes a historical approach, and Witvliet speaks of survival.

Welch expands on these ideas in another essay on the VISA website.* In this essay she talks about a rebirth of painting. (Some among us would say it never died but that’s a separate debate). In an age of saturation by photo-based images Welch considers painting as relevant as it ever was. Perhaps more so.

The curators want to inspire us to make sense of our own reality. Have they been successful? The show runs until Feb 21st. so go to Open Space and decide for yourself.


The artists and curators will meet in a panel discussion on Saturday, January 17 at 2:00 pm. at Open Space.