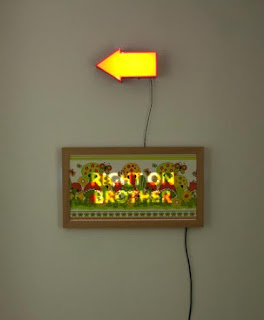 - When you talk about the viewer situated in constructed environments is this in the context of art environment or other social environments?

When I mention the condition of being constantly situated as a viewer, I mean to speak of the way in which we are all viewers (active or otherwise) in the constructed environments of our societies. Specifically thinking of the influx of images and texts we are provided with by the variety of marketing and advertising that floods our every day experiences; whether its online advertisements, billboards and television screens in the street, or even a bulletin board in an office or school setting.

- How neon, video, objects and signage interpret the viewer's experience in your opinion ?

Using neon and video, I am to employ the direct disruption of space that will cause a viewer to find pause through a physical engagement with sculpture or installation. With signage and text-based works, I am investigating the authority of voice, the notion of authorship, and the power of communication as it manifests in the realm of objecthood. In both instances, I hope to “interrupt” the viewer’s experience by creating a moment of hesitation, providing them with the chance to pause and reflect on their place in the experience. 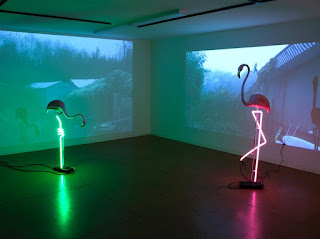 - Can you talk a little bit more about " the placeholders of memory "  ?

The placeholders of memory is a romantic idealization of objects that I see everywhere I go. I am drawn to explore the objects on mantlepieces or bookshelves in every new environment I visit. On a basic level, I see these collections of personal objects as a somewhat redundant habit we have. Often the objects we keep and display in our living rooms are sentimental in value and useless in every day life. Thus, I see objects as becoming physical placeholders of the memory they invoke for the owner.

- What inspired you in the Peter Mettler’s documentary to used the same title for your show ?

Peter Mettler’s documentary inspired me in a variety of ways. In explaining the link between the film and choosing to construct the show’s title after it, I think the quotation below (from the narration in the film) best explains it:

“We live in a time where things do not seem to exist if they are not captured as an image. But if you look into darkness you may see the lights of your own retina – not unlike the Northern Lights, not unlike the moments of thought. Like a shapeless accumulation of everything we have ever seen.”

Specifically, I am interested in the investigation of the notion that “things do not seem to exist if they are not captured as an image.” We live in a time where a high percentage of the population has a digital camera in their pocket at any given time. With a variety of social media platforms taking over our ways of communicating, I am curious about the veracity of Mettler’s assertion that we cannot help but attempt to capture everything we see or feel in an image. 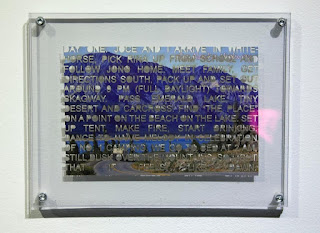 Pictures of Light runs through Sunday, Jan. 24th, 2016
Gallery Hours: Saturdays and Sundays, 12 to 4 pm,
or by appointment.
Xchanges Gallery and Studios