It was a cool damp Thursday night on January 8 at the Fifty Fifty Arts Collective, Pete Kohut’s solo exhibition “Inside / Outward” marked the 1st gallery opening in Victoria, British Columbia for 2015.  “Inside / Outward” is a series of Kohut’s recent paintings drawn from people watching in coffee shops, illustrations turned paintings, space confused to create dynamic composition for the viewer, and channeling anxiety of being in public, as an introvert.  The exhibition runs until Sunday January 25th at 2516 Douglas Street. 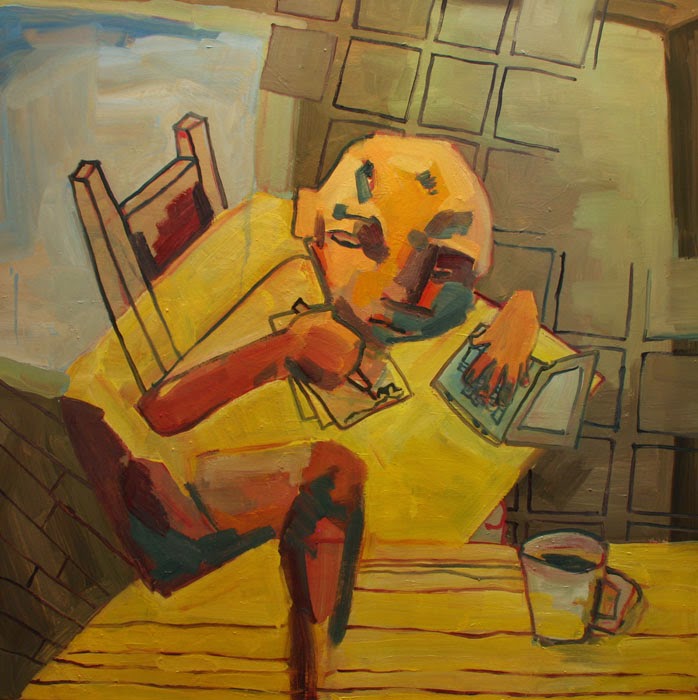 When asked, why the café and not another public space?
There’s something unique to how people use a coffee shop as a public / private space.  I think a type of space that might be similar would be restaurants or food markets. What's interesting about coffee shops is that people feel more comfortable and let their guard down, hence letting out their personal quirks. A restaurant might not have the same level of comfort, but perhaps there's other qualities that people might let show through.
An excerpt from Kohut’s blog “Artist Statement: In Progress” on October 5, 2014, gives deeper insight to his thought process:


What am I doing?  I'm making images that represent our daily life while evoking the fragmented nature in which we perceive and understand the world around us. 1) The coffee shop in North America is very much like the cafe in European countries, except that it can also function as a place to work, read, study, and be ‘alone’.  It's a peculiar space especially for that last reason. I'm interested in the crossover of behaviours between the two types of spaces, private and public. 2) Media culture has affects how we think and feel about the world. 3) I'm using retrograde media to show the limits of current media.

In the next blog entry, he provided 3 more reasons why it mattered.  Cleverly, he ended it with  "people enacting their private lives in a public space,” making “Inside / Outward” a suitable title and Artist Statement that reads like this:

Weirdly distorted and morphing figures in confusing spaces. Patterned marks, raw colours and contrasts, shifting perspective, layers and history of making. Paintings that represent people and spaces but also reference the flatness of surface.
The subject of human interaction is fascinating. For an introverted person, meeting other people is often fraught with anxiety. This anxiety is processed into these paintings.
Scenes from everyday life act as an armature onto which energetic brushwork infuse these scenes with activity and evoke a sense of fleeting memories. 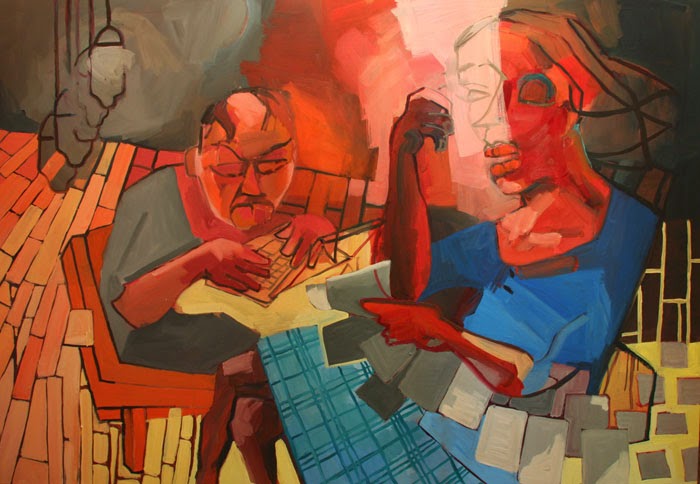 I asked if any part of the collection did not make it to the exhibition:
There are three or four paintings that didn't make it into the show, mostly because there wasn't enough room for them, but also because they veered a little further away from the ideas that I was focusing in on the show; a self-portrait for example. I'm not a very linear painter, so some of the paintings went way off into left field, in different directions.
Kohut often mentions it in his writings and interviews, so I had to ask about being an introvert:

As far as I know I've always been an introvert. I grew up the second of three sons, which might explain my proclivity for feeling uneasy when people pay attention to me. I also have a hard time in large crowds because I feel overwhelmed. I like nothing more than to spend my evenings at home painting, drawing, reading, and playing with my cat. I have few close friends but I find evenings out with three or more people are extremely draining. I recharge when I'm by myself and therefore relish my time alone. I think this is partly why I continued to make art; an excuse to be alone.

I also asked if he felt that he succeeded in channeling that anxiety into these paintings.

I feel that I succeeded in evoking a sense of excitement in these pieces by using my anxiety as fuel. Even though painting is a lot of hard work, it still is quite enjoyable and helps to relieve the general stress and anxiety that I feel during my average day. I wouldn't say these paintings evoke anxiety like Edvard Munch's ‘The Scream’ does, but perhaps the confusing spaces might give the viewer a slight twinge of insecurity. 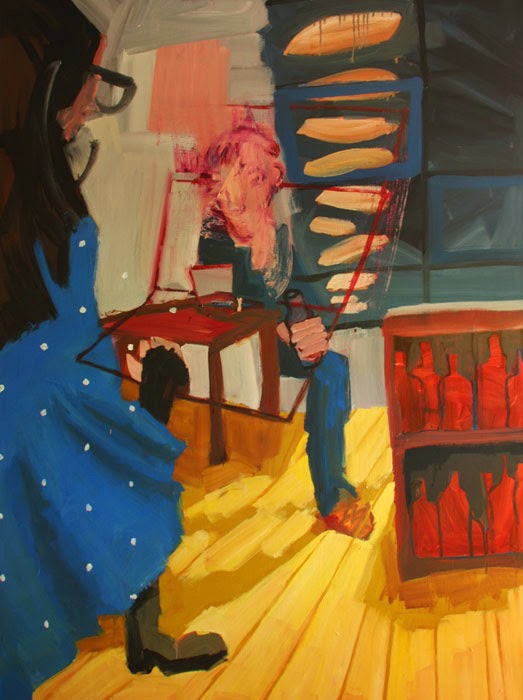 Earlier Years
Pete Kohut was born and raised in Winnipeg, Manitoba.  He drew a lot as a young boy but stopped.  Around 1993, he started making drawings again as therapy for loneliness and depression he was feeling in his teens.  In 1995, he experimented with acrylic paints, made rudimentary colour fields and still lifes to get a feel for the material.

I remember wanting to be an artist when I was a young boy because I liked to make things, but was dissuaded by my parents.  They said that if I wanted to make a comfortable living, I should choose a creative career such as architecture.
It was in middle school that his art teacher encouraged Kohut to keep drawing.  When he got to university, he quickly found architecture to be too constricting so he focused on visual arts (painting) and graphic design.

I ended up choosing graphic design because I thought it might be a more accessible way to make a living.  This way I could work nine-to-five at a job that challenged me creatively and I could pursue my passion for making art in my spare time.

As Painter & Book Designer
Kohut became a practising designer after graduating from Red River College in 2001.  Slowly, he made his way to the West Coast (Victoria) where he now works as an in-house book designer for a local publisher called TouchWood Editions who publishes roughly 25 books a year.  Kohut designs the covers and layout the interiors for their book list that includes fiction, non-fiction, local history, mysteries, cookbooks, and short story collections.
Interested in the junction between paint and graphic design, I asked Kohut if he found designing books influence his paintings.


I think working as a designer has helped me to define what that differences are between art and design. As a designer, you are trying to communicate your client's message in a way that it best reaches it's intended audience. It's a lot like problem solving. Art is different because it is more about asking questions than getting answers. It's about your own message, your own thoughts and ideas that you are conveying to an audience.
I find that my paintings act as a relief from my design work. In my painting, I break the ‘rules’ of layout and composition. I can do whatever I want. There's no client or creative brief to follow. I'm still painting with an audience in mind, but I'm not necessarily interested in making art that they will like.
I will say that working as a book designer, I'm much more aware of the idea of narrative and how it applies to the visual arts. However, I'm more interested in creating an ambiguous narrative rather than spelling it out for a viewer. I want the viewer to have to pull out the meaning for themselves.

Projects
On plans for his next show and on going projects, Kohut said:

I don't have any other shows planned as of yet. I'm hoping that I might be able to show this series in a few other galleries in town, but we'll see how that is received. My last few paintings have been about exploring further the idea of using brush strokes as the pattern on clothing to confuse the space. "Beneath the Beard" is a good example. I'd like to see where it takes me.

Kohut is taking part In Cahoots, curated by Efren Quiroz, showing on November 6th at the Slide Room Gallery. Kohut is partnering up with Nicole Neidhardt, whom he met in a painting class at the University of Victoria a few years ago and who will also be graduating with her BFA this year.  Kohut said he is looking forward to this experience.

In 2010 Kohut was a finalist in the 1st annual Victoria Emerging Artist Awards.  He is enrolled in the Visual Arts program at the University of Victoria on a part-time basis.

Artist Quote
In my research and interview, I found this quote of Kohut to be powerful, “I realize that painting is in itself a lie (or illusion), but it's a good one.”

A Message from Pete Kohut
I'd like to thank everyone at the Fifty Fifty Arts Collective for letting me exhibit my work in their space and helping with the reception. I'd also like to thank you (Sheila Alonzo) and Efren Quiroz for your interest and media coverage.
Pete Kohut 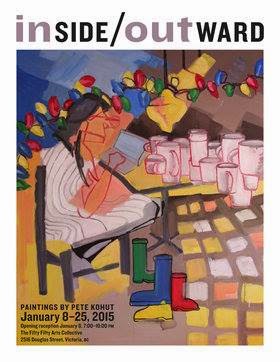 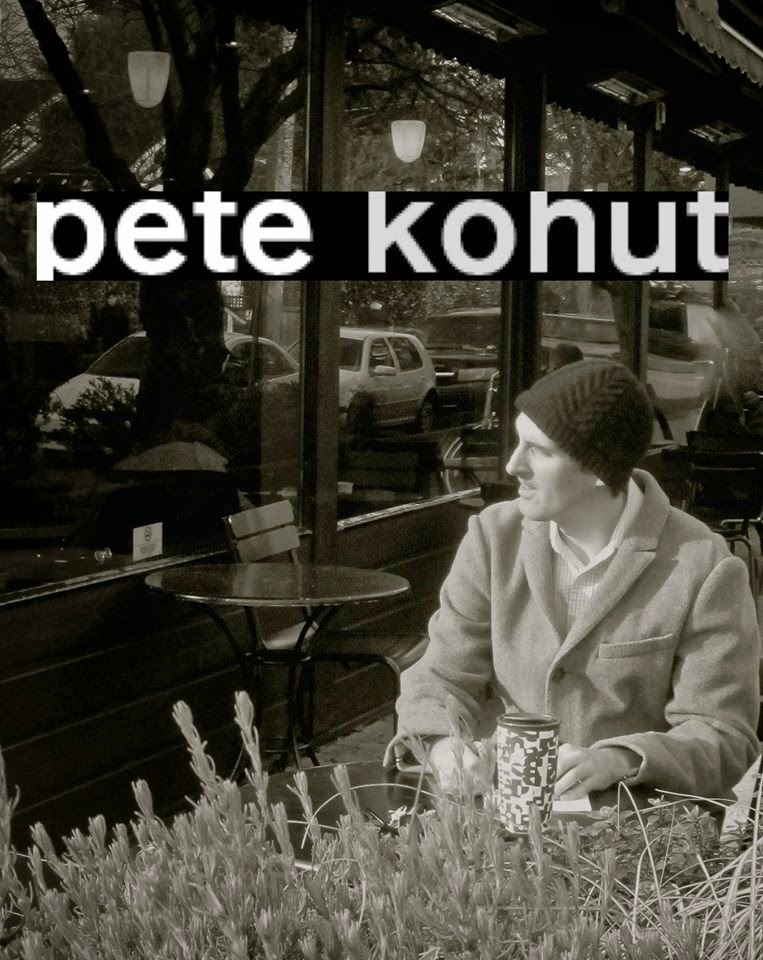