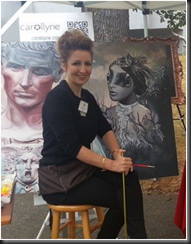 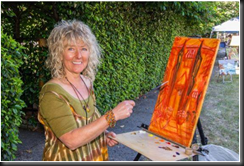 It’s summer and time to get out and make connections. And where better than the Moss  Street Paint In where there are lots of connections to be made. … Carollyne Yardley, Robert Amos and there’s Linny D. Vine, a few clouds don’t bother Linny. Connected with Godfrey Stephens who I hitchhiked with in Greece. 1962 I think it was. I don’t make this stuff up. Seen Godfrey a few times since of course. Ucluelet, James Bay. He’s living in Esquimault and he has a book out…. ‘Wood Storms, Wild Canvas’… Irma Soltonovich, Lesli Ellis, Lyle Schultz...it was non-stop connections. 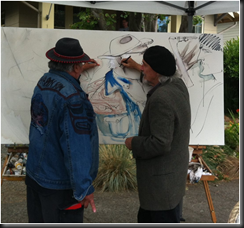 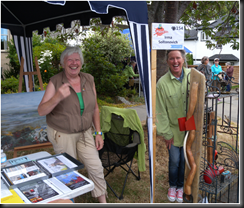 And then there’s Deluge Gallery… an opening for Tamsin Clark. She is showing some intriguing photographs representing, says Clark, ‘conversations I’ve had with these spaces and places.’ These are captured moments made into art. Polaroid shots of rooms, tables, gardens loaded with associations.

Perhaps from the rather suggestive picture of a bed on the invitation I had been expecting something more…er…Tracey Emin. Not to worry. Tamsin’s polaroids are evocative and dreamlike enough and her grand-children are delightful.

Tamsin is living in the Annapolis Valley. I lived there once too. Wolfville to be precise. Same time as Alex Colville (with whom I connected). ….she knows Michael Coyne at Acadia University so bingo there’s another connection right there. 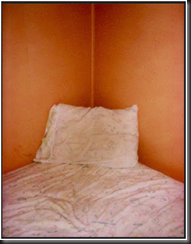 I was talking to Bill and She-she Blair at the Ravenous show in Alcheringa. They were just back from London where they’d met Duggie Fields. Who used to share his place with Syd Barrett. Poor Syd. I’d often drive him from the Grove to Duggie’s place. He never would have made it otherwise.

Connected with some panhandlers briefly on Douglas before deciding I needed to connect with a washroom. So I slipped into the user-friendly one at the Bay Center. That went well so I continued through the mall and reconnected with Government Street and had a browse around Munro’s Bookshop. What should I see there but ‘American Smoke’ by Iain Sinclair! Talk about synchronicity…I’d just been reading it! Iain Sinclair likes places and connections too. In the book he travels across America meeting people like Gregory Corso and William Burroughs, both of whom I met in London in the Sixties. Excuse the name-dropping. Sinclair uses these meetings as springboards for his own literary meanderings. He’s late to the party but the book is loaded with interesting references which are well worth following up. And it’s another excuse for a bit of what used to be known as creative writing now called self-indulgent rambling depending on your point of view. The next place I connected with was Commercial Alley (between Yates and Bastion Square) where I had hoped to find Roy Green painting on a wall. No such luck. He has got some sheets of plywood however and he’s off to a good start. Relax….it’s all perfectly legal. Roy’s efforts are sponsored by Open Space and sanctioned by the city. The project will coincide with Integrate Arts Festival.

Only connect….who said that? If you said Timothy Leary you’d be wrong. It was E.M.Forster.
Watch this space. 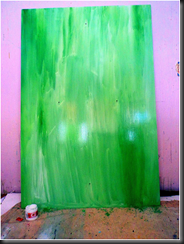