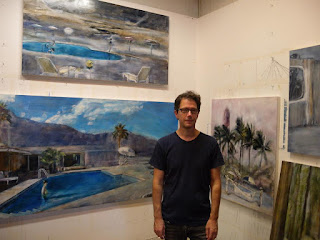 Neil McClelland is originally from Quebec and he graduated with an MFA from Victoria University where he now teaches sessionally. He also teaches at the Vancouver Island School of Art.

I first saw his paintings at Open space in a show called ‘Realities, Follies’ curated by Lynda Gammon and Wendy Welch and remember being impressed. In that show McClelland took the opportunity to explore the historical relationship of Cezanne’s bathers to the kind of snapshots people like to take on beaches. There was nothing irreverent about the paintings but it was obvious that Cezanne was getting updated. 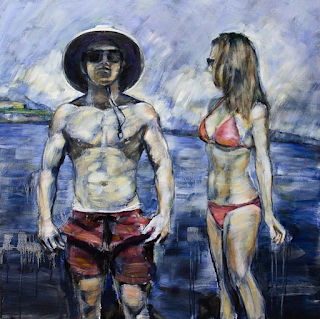 A similar attitude towards history was evident in a series of paintings shown at Vernon Gallery in 2014. In this show McClelland dealt with the way we perceive art works in a gallery setting “….exploring connections and disconnections between the art historical tradition and contemporary, digitally-mediated visual culture”. ‘Approaching Rembrandt’ seems to encapsulate his intentions i.e. it’s not the actual painting that is central but the approach. In conversation he talks a lot about perception…..or how the way we see works of art defines who we are. 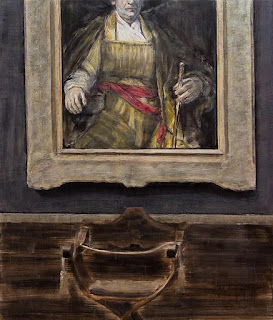 Being confronted by McClelland’s work in his Fisgard Street studio I was struck by the unreality. There’s an elusive strangeness that made me think of Peter Doig. The work is figurative but other-worldly. It’s a distortion of reality but not without an underlying meaning, familiar but remote.  Like Doig, McClelland takes a painterly approach. Take ‘The Ancient Sickness of Dreams’ for instance, a tropical setting clearly but where? For some reason it reminds me of a scene from Paul Theroux’s ‘Mosquito Coast’. ‘In the West the Sky Contracted’ shows a burning building, horses, a truck, that evoke ‘Black Beauty’ by Anna Sewell. 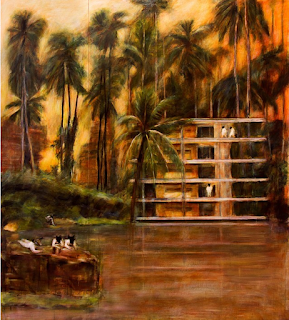 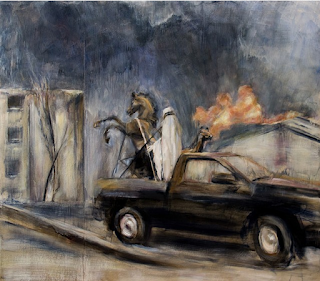 These are personal memories of course. Our minds are full of them waiting to be triggered. In fact the horses are a truckload of statues the artist saw during the fire in Edmonton. He uses photographs but photographic reality is superseded by the painting process. But what to make of ‘The Wild State of Freedom’ where we see some sort of oneiric procession, suited figures bearing a panoply around an arena that could be BC Place, ….  what does it mean? Or ‘The Beneficent Net’ with semi-nude people surrounding some kind of fishing net? What strange catch have they made? ‘Everything is Being Perfected’ shows humans interacting with nature, young men amusing themselves with turtles (though the turtles don’t seem to be having much fun).These are symbols beneath which we sense, but can’t quite pinpoint, some universal absolutes. 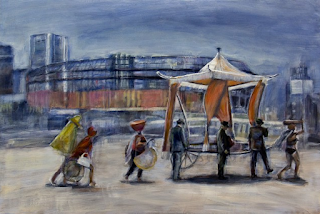 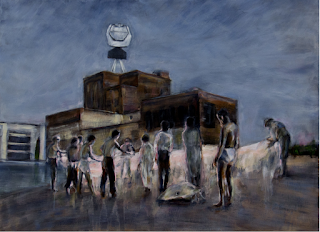 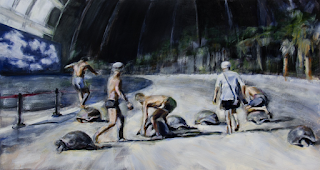 There is a consistency to these paintings. They are intriguing precisely because they aren’t explicit and the political references aren’t overstated. Aesthetics and dialectics are finely balanced. In conversation McClelland talks about Utopia and Dystopia, philosophical issues that lie beneath our everyday concerns, as being inherently political. He sees the act of imagining futures as a political act. The paintings engage with the problems of our times and our hopes for the future but in a subtle way. Something is wrong in paradise. There’s a rift between culture and nature. An ominous crack in the earth is forming next to what appears to be a tranquil painting of a swimming pool. 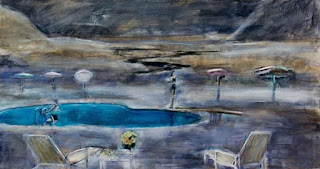 It’s the possibility of human perfectibility that interests him he says, optimism and pessimism being two sides of the same coin, which prompts me to ask if he is optimistic. Well he isn’t gloomy he says though the omens aren’t great. Global warming, pollution, competition for resources, super-power rivalry, a general feeling of malaise. These are anxious times and we certainly have a way to go before we reach Utopia. Dystopia is much more likely. Nevertheless there is always the possibility of new beginnings. 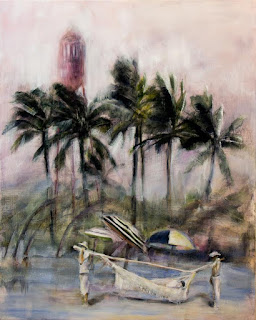 Time, existence, human survival, these are major themes and most of the works are correspondingly large in scale. There’s nothing timid about them. These aren’t paintings that were made for quick sale. McClelland is aiming higher than that. But the paintings at Deluge aren’t just physically large they are large in scope. Perhaps even museum caliber. It would be interesting to see how they measure up to broader exposure. Neil McClelland is energetic and ambitious so hopefully one day we will find out.