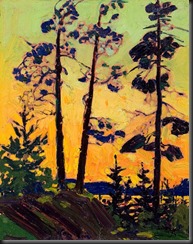 A certain aesthetic seems to prevail in BC landscape painting that probably can be traced back to the Group of Seven. The Group succeeded in creating a Canadian landscape form that has evolved into a uniquely West Coast style that pulsates with life, rhythm and the spirit of place. 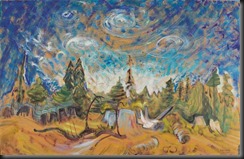 Emily Carr set the pace of course with her powerful and evocative depictions of West Coast iconography as did Jack Shadbolt who explored the subject from a semi-abstract angle. 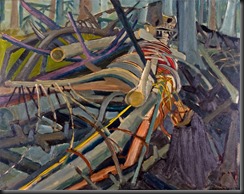 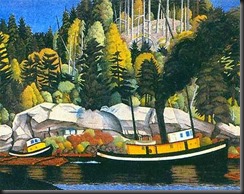 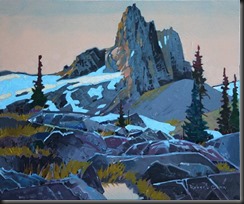 They were followed by painters like E.J.Hughes, who studied under FrederickVarley, and Robert Genn who passed away recently. Genn’s paintings continued the Canadian landscape tradition with a strong sense of design and form reminiscent of the Group who were themselves heavily influenced by French Impressionism. 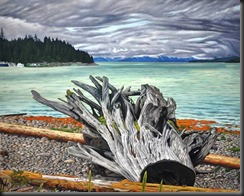 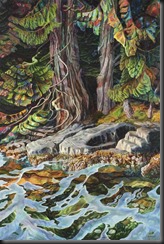 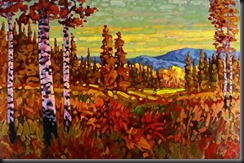 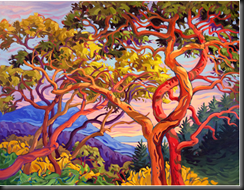 The West Coast style of painting lives on. It can be found in the work of artists like Glenn Clark, Drew Burnham, Ken Gillespie, Greta Guzek and others who all share a similar approach to line, form and colour whilst following their own visions of B.C.s majestic scenery. Some are mainly interested in capturing the essence of place, some are cerebral and some are exuberant. All show love and respect for the grandeur of nature.

Which brings us to the reason for writing this piece, Linny D. Vine, who has brought the genre up to date by adding a personal touch. 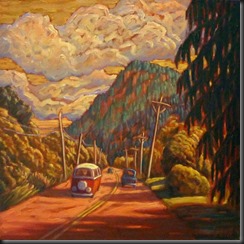 She was born in Saskatoon in 1960, grew up in Vancouver and she has lived in Victoria since 1992. In actual fact she lives in Linnyland. It’s a happy place where trees and buildings bend to suit the mood of the paintings, where water and sky are full of rich impasto movement. She draws on local landmarks for inspiration. Her urbanscapes include places like City Hall, the Belfry Theater and Swan’s Pub rendered to appear idyllic. Cherry blossoms for instance, a welcome sign of spring in Victoria, are cotton candy like but never garish. They are always integrated into the background so that the colours are slightly exaggerated but always harmonious. Her landscapes often feature a Volkswagen van, a sixties symbol of freedom and life on the open road…..minus any hint of traffic congestion or clear cutting.

There are no discordant elements in Linneyland. It’s part of the charm. She describes herself (Focus Magazine May 2012 article by Christine Clark ) as ‘….a realist who knows the world is not all beautiful. It’s a balance of joy and sorrow. I’m a big believer in feeling everything, but I love to strive for happiness.’

Linny D.Vine’s work incorporates both Emily Carr’s emotion and the more formal approach of Robert Genn. At the same time she is revitalizing the landscape scene with a lighthearted quirkiness. Her paintings are friendly and very approachable expressions of sheer joy.