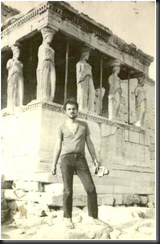 You won’t find Godfrey Stephens representing Canada at the Venice Biennale. He’s a maverick, his work isn’t easily classified and he’s never had much time for the ‘official’ art world. Futurism, Art Deco, Sixties psychedelia, Emily Carr meets Picasso, skip all that arty stuff…let’s just say his work is a fusion of European and West Coast elements. He isn’t unaware of art history but you don’t find him networking at art openings. He has always been happier on West Coast beaches carving driftwood and hanging out in places like Gibson’s, Ahousat and Hot Springs Cove. Nowadays he can mostly be found working in his Esquimalt studio.

Godfrey Stephens has charted his own course. In spite of staying outside the ‘gallery system’ his work has found its way into many collections and public places around the world.

He was born in Duncan B.C. and spent time in James Bay, where he got to know Chief Mungo Martin and Tony Hunt, before his parents moved to Hollywood. Travel has been a major part of his life. He was part of the Beat Generation (though he doesn’t like being called a beatnik). I remember seeing a mural he did in the Beat Hotel, Paris in the Sixties that wouldn’t look out of place in Bean Around the World. He spent about three years in Greece and was among the first young seekers to be drawn to the spiritual mysteries of India travelling there overland at a time when many people in Eastern Turkey, Iran and Afghanistan had never seen a Westerner. He journeyed from Lahore to Calcutta, from Goa to Nepal, to the sadhus and the ghats of Benares, witnessing at first hand the Dance of Shiva. 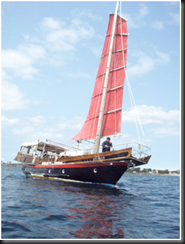 He developed his distinctive style early and it has stayed consistent over time. His paintings are colourful, exuberant, full of life, movement, humour and hidden details. They often commemorate events in his life, places he’s been and people he’s met. And sailing of course in the many boats he’s built himself over the years. 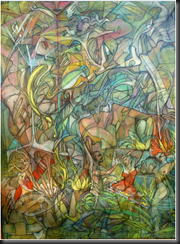 Likewise his portraits start with line drawings onto which he builds using elements from the subject’s life. His portrait of the late lamented Michael Williams is a good example. Recognizable elements emerge and retreat from a maze of graceful flowing lines before the addition of colour. At first sight this approach appears purely instinctual but all the elements come together. There’s an underlying formality and unity of composition. 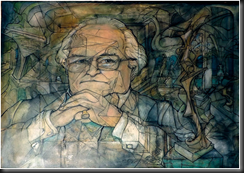 
Weeping Cedar Woman, created in 1984 in response to the proposed logging of Meares Island, makes a powerful statement about the effects of ‘progress’ on nature. A little too powerful for some members of the Tofino Municipal Council perhaps as the figure currently resides behind the community hall rather than in a more prominent public location.* 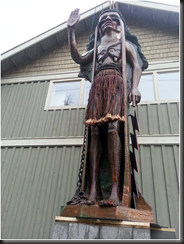 Stephen’s studio is a jumble. Energy emanates from boat parts, tools, figureheads and partly finished paintings. He starts them and puts them aside and takes them out later. The paintings are never finished he says. He’s always reworking them. Everything is in flux.

There’s real sense of freedom about Godfrey Stephens and his work. You can smell the cedar and hear the waves crashing. Looking at his paintings and carvings reminds us of the wild West Coast and the transitions that have occurred in his lifetime. Gone are the days when you could build a driftwood shack on Long Beach. Things are much more regulated now. Tofino has become a place of bed & breakfast, kayaking and latte drinking. Not that there’s anything wrong with that. Times change. The ocean and the trees are still there.

Now finally there is a book. It’s full of photographs of boats, carvings, paintings and sketches all excellently reproduced. Godfrey is such a wild free spirit it’s hard for writers to pin him down. There is a foreword by art critic Robert Amos that hits the right note. Writer Peter Grant’s text fits the imagery perfectly and he manages to capture the elusive Godfrey Stephens ethos, no easy task. Publisher Gurdeep Stephens has done a superb job of putting it all together.

The book is a timely reminder of the untamed West Coast spirit and it puts Godfrey Stephens well on his way to becoming a legend.

* I just heard Tofino has agreed to put the statue in a field across from Strawberry Island. PW.