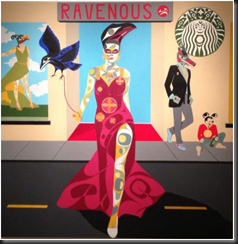 Language evolves according to circumstance. Using terms like Indian, aboriginal, native, indigenous or First Nations is full of potential pitfalls. Writers must be careful to use the currently acceptable vocabulary. It’s important to be both involved and objective without being elitist or patronizing.

First Nations art has evolved considerably in recent years and it’s understandable that young First Nations artists should want to be more, dare I say it, relevant. One needs only to look at the art of Andrew Dexel who stretches recognizable ovals and trigons into dynamic curving shapes. We saw this evolution again in the show called Urban Thunderbirds/Ravens in a Material World at the Art Gallery of Greater Victoria last fall. Four young artists, lessLIE, Dylan Thomas, Rande Cook and Francis Dick, got together to present a fresh look at the kind of First Nations art that has become so familiar especially here on the West Coast. They used traditional formats to make political statements. lessLIE showed bold prints with provocative wordplay and Dylan Thomas’s prints were stylized images of non-traditional subject matter. Rande Cook’s paintings suggested what it means to live in a city. One of his photographs showed the artist posing in the streets of New York City wearing a Kwaktiutl/Louis Vuitton mask. Francis Dick added a feminist perspective to the show by depicting First Nations women as cultural heroes. The work of these four artists and others like them is transformative. They are re-appropriating imagery to create new cross-cultural forms.


So is it possible, or even desirable, to transcend cultural barriers and arrive at some kind of fusion? This is the kind of question posed by Rande Cook and Carollyne Yardley in their collaboration ‘Ravenous’ at Alcheringa. There are certainly elements of both cultures here.

As Chris Creighton-Kelly points out in his article about fine art (Focus Magazine, June 2014) both Picasso and Gauguin borrowed - some would say stole - motifs, styles, and content from so-called primitive peoples. The borrowing seems to have gone full circle. Of course some will see it as appropriation but neither Yardley nor Cook appears to have a problem with that. There is no sense of conflict. The show isn’t intended to be a break with tradition so much as a comment on contemporary society. There is an acute awareness of the modern world and the dilemmas faced by aboriginal people. Yardley and Cook have gone beyond deep-rooted stereotypical thinking and aimed for some kind of apolitical synthesis.

Rande Cook was born in Alert Bay in 1977. He is a chief of the Kwakwaka'wakw Nation and very aware of his cultural heritage. He works in a variety of ways, wood-carving to jewellery making and painting.

In this show Cook uses the story of the Raven as trickster or shape-changer. “I vowed to never reproduce and sell sacred ceremonial objects,” says Cook. In order to do this he had to invent a new vocabulary of design motifs. He tells ancient stories using contemporary methods.
Carollyne Yardley was raised in Victoria. She uses classical painting techniques and a traditional i.e. fine-art, style to create work that reflects contemporary and personal concerns. She is the first non-native artist to show at Alcheringa.

Yardley describes her art as pop-surrealism…‘exploring character development through humour, portraiture, pop culture, and absurdity.  The squirrel face is a metaphor for the secrets we keep.’ She is not shy about her fixation with squirrels.

Elaine Mond of Alcheringa Gallery sees the show as a ground-breaking collaboration; the first of its kind in Victoria that she hopes will broaden the base of the gallery. With ‘Ravenous’ at Alcheringa Rande Cook and Carollyne Yardley have taken an intrepid step in a new direction.

There’s nothing disrespectful or exploitative about any of this but my sense is that purists are going to find some of it a little hard to digest. They shouldn’t. The show is challenging. Art is never static. Definitions are constantly evolving. Anyone who finds it shocking needs only to look at the revisionist art of Kent Monkman. Monkman, of Cree and Irish descent, makes very strong statements about history, consumerism and the ironies of life in the modern world. Cook and Yardley have combined humour and spirituality to the same effect.