December 10, 2001
morningish...
My head hurts. I didn't get very much art done yesterday. I decided to pick up beers, and well, drink them. I went to that bar for a while as well. The one with the cheap drinks, I think I mentioned it yesterday. I decided to leave when the "humants" began to show up. I will attempt to wash off the rot of the night with a long bike ride.

noonsih...
Biking helped. I picked up some groceries as well. I bring my own bags when I go food shopping. Im not big into wasting stuff, especially plastic things. I usually get treated like some kind of terrorist for doing so. People will ask for a bag to wrap a bag in. "Its my right! I work hard for my bag." "Would you like a baggy for your bag sir?"
Gah....

There's a crazy Russian lady living downstairs in this building. Every time I do laundry she magically appears. Manically uttering Russian phrases at me. I have no clue what her deal is, or what she is saying. Day and night she blares Russian military marching music. I feel like I am in the Soviet Union. Her mouth is full of gold. She has a grill without knowing it. Or maybe she does know. Maybe she's a Russian gangster. A putrid fermented rotting cabbage smell permeates from under her door. For some odd and deeply disturbing reason, the scent evokes erotic alienistic thoughts in my head. What kind of weird Siberian love slop is she brewing in there?

It seems as though she has taken an interest in me. Well more so my phone. Last night she was banging on my door. "Phone!, Phone!, Phone!". No "hello, or how are you?", just "Phone, Phone, Phone!" Complete insanity. I thought it was some kind of emergency so I let her in. I told her "You are not allowed to phone Russia." For all I know she could be dialling Boris, in the middle of a forest, listening to him eat a bowl porridge. I don't need the KGB closing in on me. She dialed what seemed to be 21and a half numbers. I asked her "What the hell kind of local call has that many digits in it?!" She looked at me. Squinted the left eye. And slowly raised a yellow crippled finger up to its puckered leathery lips.... "SHHHHHHHHHHH!!!!!"

Gold teeth
sunk in a
rotting
pound cake.
A hissing
snake
of a
sound.

I admit I was a little intimidated. It reminded me of the free floating full torso vaporous apparition in the library scene of "Ghost Busters". She then started screaming on the phone in Russian. It's hard to tell if she was mad or happy. Russian is a fairly abrasive language at the best of times. And apparently works best when YELLED!!!!

Come to think of it I don't even know if she was speaking Russian, it sounded more like a homemade Hebrewian hybrid.
Perhaps a strange magical incantation of sorts. Who knows....
This verbalized insanity went on for a good (or bad) 8 minutes. By this point she was spitting on my phone "Pah!,Plah!,Pah!" Her face all pinched and evil. Pinky meaty marbled Russian fist mits pounding on my end table. Pencils and pens rolling to the floor. Dogs and Cats living together,...mass hysteria!

She then hung up the phone, made some kind of faint, wheezling farty noise, stood up, walked to the door, and proceeded to exit with a "kerslamping" sound.
Oddly enough all I could think about was that poor phone. Sitting there, cold and alone. Cradling itself .Shivering. Slathered in Siberian mouth slime.
I wonder if that strange message from "ART" the other day is in any way connected to this ordeal? I must do further investigating.

December, 11 2001
I was awoken this morning by a peculiar, yet oddly familiar sound. It began with an irritatingly squeaky rusted hinge of a noise. Followed by wrinkled rustling, and ending with some metallic clinkery.. Skrrreeeeeeek, rustle, crustle, clink, skrrreeeeek, krustle, rustle, klink. This hard boiled boner ballad went on for 7 minutes. Some God only knows how long this racket was going on for before I woke up.
I hesitantly dressed and ventured outside to investigate these goings on as it were. The Russian! I should have known.... There it was, that stygian soul sucker. Rummaging through everyone's mailboxes. A pathetic pilfering polotus pig***, bathing itself in other peoples private information.
Before I could question the beast, it hissed at me. Hissed! It was a hissler. A hisswheezling hiss whistler! The hisswhistler then looked at me, and gave me the old stink eye. I had to duck down to dodge the stink lines. The demonic stinkers struck a metal pole behind me, and ricocheted into my little flower bed.
When I looked up the Russian was gone.
Great......

I currently have 3 assignments to do for school. I'm working on my own projects instead. I have been writing weird poems as of late. I write most poems with an old manual typewriter. I like it, something about having to push really hard on the keys to get your thoughts out. I built a device that enables me to type while I am submerged in a bathtub. It works fairly well. The only down side of bathroom typing is the racket. Its mechanic hammering plays ping pong with the shower tiles. Echo pasted reverberations. I only use it when my neighbours are away. At night I write shorthand.

I despise computers, yet I am required to use one for English class essays. I don't even know how to operate one. My English professor is cool. He said I can use a typewriter for the time being. I'm curious as to how he marks my last paper. We were supposed to write an essay about some book. I cant remember what it was called. We had to buy it. I didn't feel like wasting money on a book that I didn't want to read. Instead, I decided to write a paper about my favourite movie, Brazil. In my mind I think that's what he was actually asking me to do. The whole book thing was just a cover up. A scheme the school put him up to. I spent a lot of time on the paper. If I am interested in something I will usually do a good job. Usually.....

I found a nice perch on a hill. It over looks a portion of the city. Below, a bleeding main artery of traffic spews past. I like to bike up there at night. It helps me calm down. I came up with a phrase while sitting there. "Blue City Veins". I was looking at the blue veins on my wrist and thinking it was kind of like the pulsating traffic down below. Maybe I will make a painting called that, or a poem.

I have been typing on onion skin paper as of late. I like how it looks. It's transparency, it's fragility. The ink sits differently on the page than normal typing paper. Warbling like a tear drop on a Japanese animations cartoon eye ball. The ribbon is wearing thin for this typing machine, kind of like my patience with that Siberian Cyborg .
blahhhhh

My arm hurts when I write, or pretty much when I do anything. I have to wear a magnetic velcro strap around my elbow area. I have acute tendonitis caused by repetitive strain on my arms. Slave labour jobs are to thank for that. It feels like some horrible demon elves are playing tug of war with my tendons. Plucking on my sinew as though it was an out of tune elf harp. It hurts the most playing guitar, but I play anyways. I am always in some sort of pain. I would feel strange without it.

I have decided to change my writing name. I find writing under my legal name is getting in the way. It is now Henry Sausanger, or perhaps Suasager, or maybe both.

*The Russian will now be referred to as "IT" or "The Russian" from now on . I don't believe this creature has a particular sex or is even human for that fact.

**Polotus Pig - A strange and very rare creature indeed. It was discovered by a colleague of mine. Due to legal reasons his name can not be revealed. The pig like creature was discovered in a dark basement of an old warehouse. This sick creature can live for decades without feeding. Its legs are long and spindly and can not support its own weight. The polotus pig excretes a creamy liquid that smells like that of a mint leaf. The scent of the fluid has been known to cause sexual dementia. 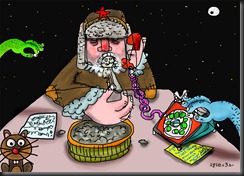 Be One of Our Sponsors