Blair, Yardley, Schultz and the Pop Sensibility by Philip Willey

Call it synchronicity or serendipity, one of those words, but sometimes things just seem to come together….as when three quite different artists with similar pop interests decide to show simultaneously. 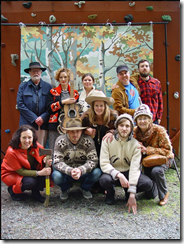 I think the first time I met Bill Blair it was at a show of his photographs, Open Space maybe, back in the 80s, salmon chanted evening, so I thought of him as primarily a photographer. But I knew he had other interests. Paint by numbers being one. It’s the kitchiness that intrigues him I think. He likes to pose people in front of paint-by-number type trees….perhaps holding an axe or a decoy duck. The result is a whimsical Canadian unreality. He likes Mexican iconography too, the nostalgia of vintage postcards, votive offerings. In recent years all these elements have fused into what he calls guitar shrines. These are guitars, or ukuleles, often incorporating paint-by-numbers scenes, nudes, birds, artificial flowers etc. often with a string of coloured lights. There seems to be no end to Blair’s inventiveness. You can see his work at Victoria Spirits out on Old West Saanich Road. You can also learn a lot about the distilling process. They make gin there. And whisky and vodka. Take a designated driver. 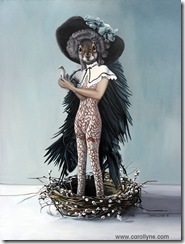 Carollyne Yardley is another artist with a pop sensibility. She studied at U.Vic, the Victoria College of Art and with Tony Ryder in Santa Fe, New Mexico. In 1997 she founded a software application and web development company so she has a strong foundation in the visual communications industry. She views art and design as a process of thinking, creating, problem-solving, and communicating.
She describes her work as Pop Surrealism. She cites Mark Ryden as a major influence along with Todd Schorr, Heather Watts, Ron English and Noah Becker perhaps because they blend pop culture with traditional techniques. She also likes Wonder Woman, Elvis Presley and helicopter rides. And she’s Sirius about squirrels.
In September 2010, Carollyne launched her new business as a visual artist, and “began to remove the mask of technology to emerge as her true self, standing with her hands on her hips, yelling and laughing at the squirrels in her yard.”
The squirrels turned out to be an ideal vehicle for communicating her observations about people. They allow her to explore character development without being too blatant or anthropomorphic. We in turn are obliged to think about her intentions. If we recognize something of ourselves in these cute little creatures so much the better.
Her technique is illustrational rather than painterly and always it’s the big eyes, that look of startled surprise, which hold the viewer’s interest. Her work will be at Sooke Harbour House Gallery until May 28th. 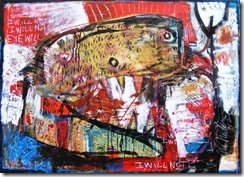 Meanwhile at Bean Around the World, on Fisgard Street, Lyle Schultz, yes him again, continues to explore the obscure recesses of his mind to bring us a new collection of mixed media creations. Full of surprises that’s Lyle. He manages to be both alienated and accessible. His abstracts are never totally abstract, his figurative works enjoy throwing curveballs. You just never know where he’ll pop up next. You may have seen his soup cans, or his hairy trousers, or his pointy shoes. Perhaps you’ve run into one of his light-bulbs? Maybe you’ve thrilled to his gladiatorial sponges fighting to the death in a kitchen sink arena on facebook? Perhaps you have some of his worms. No? Well now’s your chance to get some. Versatile? You bet. He can do cartoons. He does landscapes too when he’s not making wry comments on art history and foraging through the dark side. All this on a diet of Mr. Noodle and ketchup with a landlord breathing down his neck.
Victoria, BC - May 2012
Posted by exhibit-v - Efren Quiroz at 10:34 PM