Let’s play! The novelty of Contact Games jiggles and sways with the interaction between entity and participants that boing and shift, grapple and manoeuvre Megan Dickie’s palpable sculptures. A dynamic modification of our discernment about object and material changes with each play we engage. 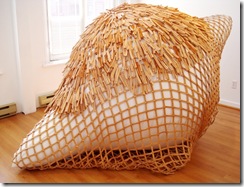 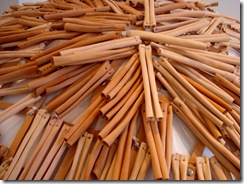 The Tangler, an ostensibly ponderous leather net encapsulated inflation, liberates amazement when it refreshes its position after a press in the opposite direction, wrestling with balance and upright positioning. The work invites with cajoling coax to reposition, to realign and shuffle our viewpoint. This enlarged embodiment abstractly portrays a field of vision, which topples quietly and reconfigures, with ballast that keeps the leather-fringed apex on top, a system of controlled interaction. Challenging reason with diversion, the absurdity of interchange tangles our sensibilities. 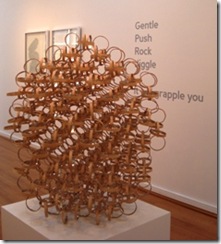 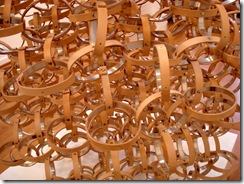 Poised on a low pedestal, The Jiggler, a large sphere of conjoined leather strips, interiors sheathed with flexible aluminum, sits waiting for play. On the nearby wall, Dickie lists interaction suggestions: Gentle, Push, Rock, Jiggle. With an advisory outcome to this interplay, ‘it will grapple you’ posted below the play suggestions we confront a choice to seize, clasp and wrestle with the sculpture to produce an circumspect tussle of what wobbles our contrived notions of novelty. “It is that willing suspension of disbelief for the moment which constitutes poetic faith.” (1) 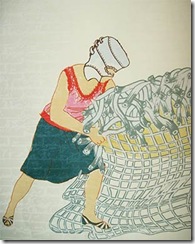 Printed wall works present silkscreened images of rebel Dickie clothed to party, wearing Mexican Luchador wrestling masks (mascaras) that signifying the identity of the wrestler, allowing the characterization of god, hero or archetype, and designating the fight as kayfabe or real. Convincing interplay reflects Roland Barthes interpreting signs described in his essay, World of Wrestling, prefaced by a quote from Baudelaire,” The grandiloquent truth of gestures on life's great occasions.” Dickie’s work develops excessive gesturing contingent on game playing, while moderating the certainty of these signals.

The Amazing Tangler presents two versions of the party-garbed dissenter in opposition to an unwieldy mass that references The Tangler. Prone, one incumbent lies arms outstretched endeavouring to envelope her opponent. This overlay impossibility is absurd, prohibitive because of the disparity between opponent’s largess and the diminutive size of the wrestler. Here, the defeat is Barthe’s “exaggeratedly visible explanation of a Necessity.”(2)Meanwhile, another subversive struggles to connect with this interweave, showing a different attack, strategy to contest the tangle. Dickie shows brave bravado despite inaccessibility, where the game’s fighter “...emphasizes and holds like a pause in music...” (3)