Fleeting information, transient objects we manipulate, exchange or briefly acquire and discard, short-lived experiences that permeate our lives needs context to describe, to understand. An opportunity to reflect on the barrage of material layering and consequences of that saturate is presented in the works of 9 discerning artists at the Slide Room gallery, through the Pedestrian Colour exhibition. The derivation and relationships to nullity these artists employ to produce work have a multifaceted import because of John Luna’s curatorial vision. Independent of the Pedestrian Colour framework, each artist has a personal response to their environment; each uses public resources as materials for their constructs or imagery, availing perspicacity to our present society. Yet as a group gathered to develop the premise for this show, we are privy to a larger, generous view of our impatient culture.
Luna named this show after the Robert Rauschenberg’s term Pedestrian Color, describing interaction, absorption, independence and neutrality, [1] referring to how, on the street, obvious colour and form can articulate and unify, develop patina. Patina, as Luna advances in his curatorial essay, can be the evocation of significance. Throughout a pedestrian life, our seemingly facile encounters become poetic continuity. 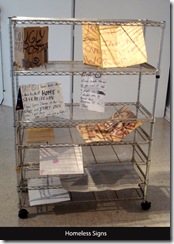 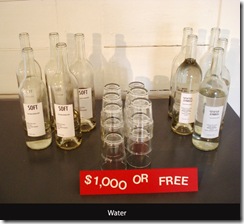 Marlene Bouchard presented bottled water, drawn from public sources. Overrun by pedestrian notions of singular consumption, Bouchard comments on the complacence of consumerism. Luna adds, “...working up of character into a culture of personality.”, which colours the outcome of our choices. Bouchard has also shows two coloured collages, one, spewing or devouring commercialized bits, literally and metaphorically to or from an hole of dark and dangerous gluttony, and a landscape where paths are torn bits of telephone directories, cows and doorways are sequestered by barbed wire, clouds are date stamped. All of Bouchard’s work luridly warns. 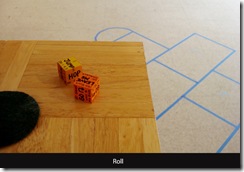 The Roll Me series by Rob McTavish are tiny cubes that denote yielding, the chance to determine and protract interactivity. “[The cubes] can be for anyone. I want them to just kick them down the street you know?”, McTavish’s says. Luna reminds us of Leo Steinberg’s 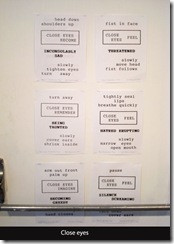 comment , “...the fruit of an artist’s work need not be an object. It could be an action...” [1] We imagine street commotion resulting from the intermittent lightness of contact with cubes and pedestrians, creating a glaze of movement. Additionally, posted on the exit door are 6 black and white prints of McTavish poems, slightly concealed by the door brace. They are street posters, of slightly variable text, like architectural hording wallpaper shouting about agonizing violence: Close Eyes and you will see that colour. 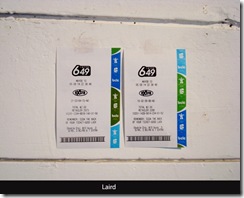 Laird Hamilton lightens the risk inherent in 6/49 by exhibiting 2 lottery tickets with the same numbers, one drawn by chance, the other obtained with the same numbers by request. This work explicitly demonstrates corrosive societal longing. Fresh white gambling receipts, tickets representing the promise of value illustrate a patina of acerbic consequence. Luna tells us, “Swapping white for money is an old notion...”. He reminds us of Yves Klein selling bare white gallery space for gold leaf certificates that Klein later discarded in the River Seine. Gaming in any form is the promise of reward, the artless draw to experience the flush of a common dream. Hamilton succeeds to colour our feelings. 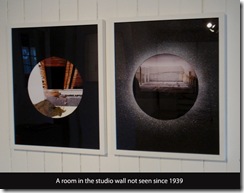 We are the pedestrian voyeurs, looking into hidden spaces with Sean Alward’s pair of photos. Alward gives up peep holes, round mats, to see a long undisturbed space discovered during a renovation - ‘pseudo archaeology’, Alward describes. In the first photo, there is a disturbing confinement, an inaccessible aperture to the daunting unknown, the brick surround of a darks squared opening, accompanied by a scrap of colour-stained cloth that brings propinquity to the imagery . Secondly, we see the open floorboards, a gaping conceptual structure that we may inspect after a studio fire’s consumption that Alward has personalized with an encircling of white gauche spray. Unlike the view we may have passing a construction site, the intimacy of theses peeks reflect, as Luna eloquently says, “hidden pockets of willful ignorance and delayed gratification like fossilized matter awaiting exposure and combustion.” 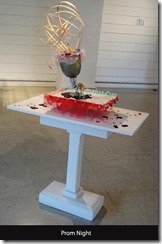 A sculptural work, Prom Night, is June Higgins’ contribution to Pedestrian Colour. A jaunty light fixture fills with remnants of getting ready for a prom, a balsa emulation of light sprays in open weave rays decorated with balloon lips. The light is perched on dominoes, presented on a flouncy platform. Higgins has provided a miniaturized explosion of festival, parading rosy memories of a customary rite of passage. Here, Pedestrian Colour interprets commonplace influences, a patina of vivid lives. 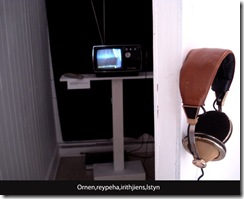 A mesh of videotaped exteriors played in an alcove present walking scenarios of visual oddments, takes us on a sojourn of dazed existence. Michael Jess’s videos are titles ornen, reypeha, irithjiens, lstyn, made-up words that accompany distortion, intoxication of Eric Satie and John Cage, asking: “alter, not the means 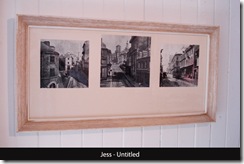 of connection, but the things being connected.” Jess’s second work displays 3 found exterior photos are garnished with cages of hand drawn geometry, and tinted to manipulate our vision. Through Jess, we visualize a hovering of imagined, imposing structure, superimposed on the pedestrian landscape, allowing us to see future probability. 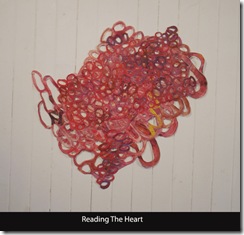 Wendy Welch’s Reading the Heart is a compressed wall work. Stitched newspapers construct a cross-section of red-saturated valves, or empty cells, holes cut and overlapped, multilayered inferences about of what is red, read and unread. Reducing communication or the heart of what matters expounds a everyday need, a regret, a hope for reconstructive treatment - the patina of a weathering soul. 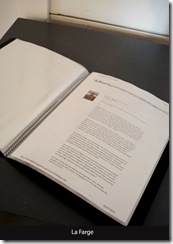 Paul La Farge contributes an essay to this show. [2] Luna obtained permission from Cabinet to include this writing as a thought-provoking component of Pedestrian Colour. Luna discusses Rauschenberg‘s ‘black-paintings’; they are physical responses, not metaphors. In this work, black is a means of revelation about ourselves. La Farge says, “Because we are capable of inaction, we know that we have the ability to act, and also the choice of whether to act or not.” Blackness as a colour or non-colour is a physical and metaphysical presence, and absence. Just as pedestrians, we interact or ignore. La Farge considers liminal space, where the threshold for human functioning or psychological response exists. As he explains, the blackness, the space of imagination is freedom. This is a daily preoccupation within our private and public reality. 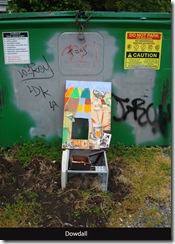 Easily missed, but decisively integral to the Pedestrian Colour premise is Jonathan Dowdall’s construction that leans against a disposal bin at the entrance to the Slide Room Gallery. There is lustre in this assemblage, a bright construct, a beacon that makes us look as we pass as pedestrians, giving colour to our day.